Not a lot going on over the last week.  Not still picture wise anyway.  I've been dabbling in the dark side - yes, video. 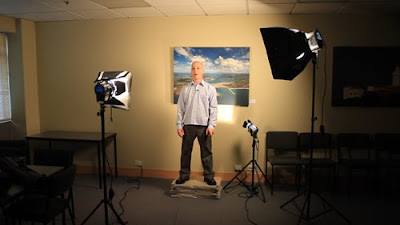 Working actually, shooting some web clips on my 7D for a promotion.  Fun working with Arri fixed lights, but the best part was having the Zoom H4n recorder on the job.  The camera mic on the Canon 7D isn't bad, but the auto gain function means it's just not up to professional recording, so I recorded a separate sound track on the Zoom and synced the tracks in Premiere.

The thing went well and hopefully I'll pick up some more work from it.  I'd better, I'm just about to drop a couple of grand on a new desktop to smooth the transcoding and editing process.  My little laptop has been a wonderful workhorse for over four years, but she's just not up to handling HD footage and the Canon HD video files require a good strong tin opener to crack 'em open to extract their goodness.

In other dark side news... check this out

Heads up astrophotographers.  A solar blast is heading our way, which should make for some Auroral activity visible in latitudes as high as around 46 degrees over the next couple of nights.  Dial up your ISO, extend your tripods and get out there!   Get high, face south (or north if you're in that hemisphere), avoid light pollution and set those exposures long!  Best hours usually between 10:00pm and 2:00 am.

I'll probably be out of town catching up with some distinguished scientists, but with a little luck I might just make it outside for some shots.  Bonne Chance.
Posted by Unknown at 11:32 AM